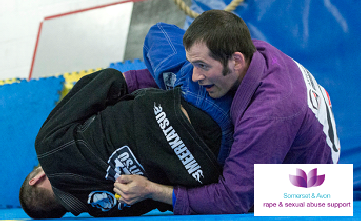 Over the 15th-16th April, Can Sönmez from the IM&T team organised another charity ‘GrappleThon’. This was the fourth GrappleThon held by his Artemis BJJ martial arts club, based at MYGYM in St Pauls.

The group managed to raise a grand total of £4,984.42 (including a generous £500 donation from the BrisDoc community fund). All money will be donated to SARSAS, a charity who run a helpline for survivors of rape and sexual abuse.

Numerous Brazilian jiu jitsu clubs from both the Bristol area and further afield took part in the GrappleThon, with a total of around sixty people getting on the mats over the course of the event.

If anybody would like to donate, the fundraising pages are still open, here: www.mydonate.bt.com/teams/grapplethon2017

This website uses cookies to improve your experience while you navigate through the website. Out of these, the cookies that are categorized as necessary are stored on your browser as they are essential for the working of basic functionalities of the website. We also use third-party cookies that help us analyze and understand how you use this website. These cookies will be stored in your browser only with your consent. You also have the option to opt-out of these cookies. But opting out of some of these cookies may affect your browsing experience.
Necessary Always Enabled

Any cookies that may not be particularly necessary for the website to function and is used specifically to collect user personal data via analytics, ads, other embedded contents are termed as non-necessary cookies. It is mandatory to procure user consent prior to running these cookies on your website.